free from cakes for everyday living

After the kitchen was completed I entered what I shall call my blue phase. For a few months it would seem the customers I know exist proved elusive. That was until I revealed a local shop was stocking my gluten, dairy and egg free mince pies. I had to keep pinching myself watching the post views on Facebook. Nothing says Christmas like a mince-pie but I never dreamt launching them before bonfire night would be so popular. 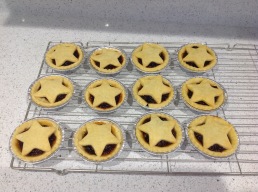 My dads birthday is a month before Christmas and when I lived at home  nothing remotely festive was allowed entry before 1st December. I can’t believe in my 40 yrs on planet earth how things have changed and food in particular. Of course I can make Christmas cake in June or hot cross buns in September but would they taste the same?

After the clocks change the colder nights draw in, its dark so we all plan for Christmas the shops have everything we need to start our preparations early. That and booking a holiday somewhere warm for next year to look forward to.

Youngest son as usual hit the nail on the head when he explained why so many people were interested in my mince pies. “it’s because they remind people of happy times at Christmas and no one will get an upset tummy”. Maybe it’s because he is the youngest and I’m clinging to cute nuggets as they become rarer but I like to think Christmas food does that.

An over used word is bespoke nowadays yet I do tailor cakes to events and people. I think that is just good service, personal and my family would say a tad obsessive.

I was approached after the mince-pie announcement to make a cake for a young lady who can’t eat dairy, eggs, nuts or wheat. Two days later the triple layer chocolate cake was heading to be demolished by hungry teenagers.

So if you are local to Selby or visiting,  I have booked my place at Christmas shopping evenings and events so I can be seen, meet people and spread happiness with mince pies and cake. Hopefully solve some what shall I buy…  and share my knowledge.

So if you see me out and about pop over.

Until next time, Victoria x